Empowering women…
from victims to survivors to advocates

DAWN’s operational approach is research-based. Research lays the foundation for all of our activities, from client selection and prioritising their needs, to developing service packages and interventions, along with issue projection and risk management.

We seek to reach out to truly disadvantaged women migrants, to provide relevant and timely services and effective interventions, to pursue inappropriate venues and critical migrant women, along with related issues and concerns.

DAWN upholds, at all times, the principle of confidentiality or the right of its women clients to their life stories (and therefore the right to decide whether they want these shared to the general public) in its publication and advocacy work.

To ensure the effectiveness or impact of our programs and services, DAWN regularly monitors their implementation and evaluates results against targets at the close of the projects.

R.A. 8042: A Critical Assessment of the Migrant Workers and Filpinos Act of 1995, Pains and Gains - A Study of Overseas Performing Artists in Japan from Pre-departure to Reintegration,

Moving On: Stories of DAWN Women Survivors and,

We Are Your Children, Too: Creative Journeys of DAWN's Japanese-Filipino Children members.

DAWN uses theatre and the arts as:

Theatre workshops and presentations are venues to facilitate needed self-expression from both women and JFC members, when deemed appropriate.

DAWN lobbies for the amendment and proper implementation of laws, executive orders and government policies meant to protect the rights and ensure the welfare of migrant workers and their families.

DAWN actively lobbied for the passage of the Absentee Voting bill which was signed into law on February 13, 2003 by President Gloria Macapagal-Arroyo.

RA 9189 or the “Overseas Absentee Voting Act of 2003” amended by RA 10590 or the "Overseas Voting Act of 2013" on March 27, 2013, allows Filipino migrants to participate in the national elections, particularly, to vote for the president, vice president, senators and party list representatives of the country.

DAWN joined in lobby work for the passage of the Anti- Trafficking bill which was signed into law. RA 9208 or the “Anti-Trafficking in Persons Act of 2003,” passed on May 26, 2003, amended by RA 10364 or the "Expanded Anti-Trafficking in Persons Act" on February 6, 2013, is meant to protect and rehabilitate Filipinos, especially, women and children, against prostitution, pornography, sexual exploitation, forced labor, slavery, involuntary servitude or debt bondage, both domestic and overseas.

DAWN actively seeks opportunities to reach the public with information and issues on migrants through print, radio, television, internet, website and social media.

DAWN encourages women to complete their schooling or pursue technical/vocational education in order to improve their skills.

DAWN maintains its website and social media accounts, continuously updating their information on the news and activities of the organization, to a broad online audience, about issues that affect women migrants and their families, including trafficking. 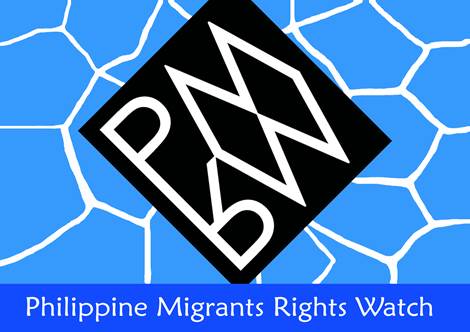 The Philippine Migrants Rights Watch is a registered civil society network established to encourage the recognition, protection and fulfillment of Filipino migrants' rights- both in the Philippines and abroad during the entire migration process.